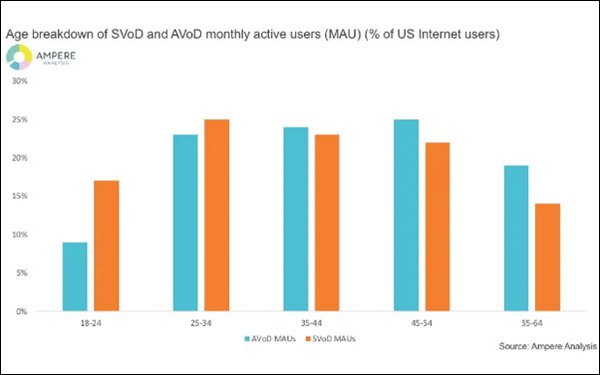 In this year’s third quarter, 17%, or nearly one in five, U.S. internet users watched one or more ad-supported video-on-demand (AVOD) services in the previous month — up from 13% in Q3 2019, according to the latest research from Ampere Analysis.

While that’s still significantly below the audiences for subscription-based video-on-demand or SVOD services, AVOD adoption is growing quickly because many consumers are willing to view ads in return for free content — particularly given that many AVODs have libraries or catalogs that rival the SVODs’, says Ampere Consumer Research Lead Minal Modha.

“The Video on Demand market continues to expand and fragment, offering viewers more choice of platforms,” Modha sums up. “Free ad-funded platforms will find themselves well-positioned to attract an audience that is either unable or unwilling to pay for multiple subscriptions. Despite some resistance to the high levels of advertising on U.S. broadcast channels, 44% of consumers in the U.S. still say that they don’t mind seeing advertising on TV, so AVOD services are quickly filling a market position.”

Ampere’s findings, based on the latest wave of its regular Consumer Tracker polling, also indicate that the audience for AVODs tends to be older and less affluent than that for SVODs.

“With distinct audiences, we believe that these two offerings aren’t competing directly with each other but rather can coexist,” observes Modha. “We have seen some companies offer both a free and paid-for tier, such as Amazon’s Prime and IMDb TV, Hulu and NBC’s Peacock. In the current climate, with both economic uncertainty and a greater need for people to stay at home, we expect the use of AVOD services to continue to rise, as more consumers will be turning to these platforms as they seek entertainment without increasing their financial outlay.”

Ampere also believes that, particularly given that the leading AVODs have been snapped up by larger companies with deep pockets, the temporary decline in advertising spend driven by the coronavirus pandemic should not be a serious issue for the AVOD sector.