Your Guide to Effective Storytelling in B2B Content Marketing 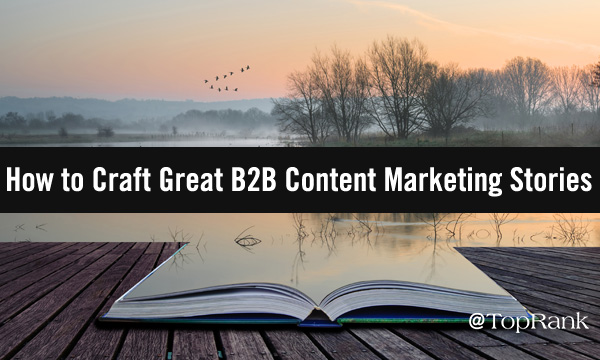 Joseph Gordon-Levitt is a guy who understands content. He was the featured keynote speaker at Content Marketing World three years ago, and his company HitRecord empowers creators to collaborate and produce awesome stuff together.

Joseph Gordon-Levitt also understands storytelling. He is an actor, director, producer, and writer who has appeared in numerous beloved movies and TV shows. His work as an author includes a series of works called The Book of Tiny Stories.

“The universe is not made of atoms; it’s made of tiny stories,” the tagline asserts.

Given his experience and expertise at the intersection of content and storytelling, it’s worth listening any time Gordon-Levitt speaks on these subjects. So I definitely took notice when the film icon suggested recently that the future of storytelling lies not in movies, but video games.

The gaming medium “feels like kind of the most groundbreaking storytelling,” Gordon-Levitt observed in a new episode of the YouTube show Hot Ones. “Storytelling that’s completely in a whole different realm than anything we’ve seen before.”

Personally, I can’t disagree with him. I love video games, in large part due to the immersion of a well-crafted narrative that draws the player into an interactive virtual world. And while marketing departments aren’t exactly concocting the next Grand Theft Auto, we do have the ability to deliver storytelling experiences that go above and beyond, by embracing many of the same principles that make video games such an appealing format in the eyes of Gordon-Levitt and others.

Of course, the formula for impactful storytelling in B2B content marketing is different from video games, or movies, even though it might share commonalities with both. To help you develop stories that engage and activate your professional audience, I’ve developed a blueprint, which I’ve dubbed the S.T.O.R.Y. model.

Sizzle. Tension. Originality. Relevance. Yearning. Every stellar piece of storytelling in B2B content marketing encompasses these five words. Let’s break down each one, and how they come together for a powerful experience. (We’ll lean on JGL to visualize these concepts.)

In Gordon-Levitt’s world of filmmaking, a “sizzle reel” refers to a short, fast-paced video edit featuring the best of someone’s past work. Sizzle reels are often put together by actors who distribute them in hopes of landing gigs. As the name suggests, these reels need to sizzle: The excitement and passion must be on display right away in order to wrangle the attention of a casting director sorting through hundreds of them.

The B2B marketer’s directive is no different. Earning the attention of our audiences in the era of rampant content saturation means we need to bring it. If your story does not imbue a genuine and immediately discernible sense of passion and excitement, it may very well not be worth telling.

Sizzle is how you grab the audience’s attention with your story. Tension is how you keep it. Storytellers can build tension by referencing or hinting at something early on, and then gradually working toward the payoff.

This dynamic was explained beautifully by Andrew Davis at CM World – one year after Gordon-Levitt’s appearance – in his opening 2018 keynote exploring the “curiosity gap” and how it counteracts dwindling attention spans. I had the pleasure of watching Davis break it down alongside my colleague Ashley Zeckman, who recapped the session here on our blog. Read her post and you’ll learn everything you need to know about using tension to keep your audience hooked.

In order to be memorable, it must be novel.

The human brain can only consciously store so many memories. There isn’t much room for redundancy.

You don’t need to reinvent the wheel with every story you tell, but there should always be at least one inventive or unexpected element that makes it feel unique.

From one view, the word “relevance” is incredibly broad. From another, it is narrow as can be.

Example: Coronavirus is relevant to every human being on Planet Earth right now. But, what about the mental health impact of a pandemic on first-time telecommuters, and how HR managers can provide meaningful support? Now you’ve zeroed in.

Here is where we begin to diverge from standard forms of entertainment. Great art often speaks to the many. Great B2B content marketing should speak to the few, but in a fiercely resonant way.

And here is where we fully settle into the marketing realm. Leaving the viewer with a sense of yearning is a common objective in entertainment – think cliffhangers – but only in content marketing is it requisite for efficacy.

This doesn’t mean someone finishes your story and has a yearning to go buy the product or service. That’s an unlikely (albeit highly impressive) outcome. It means they yearn for more – more installments in the series, more content from the brand, more information on the website, more social media posts from the account.

When your story sizzles, builds tension, exudes originality, sparks relevant tones with a defined audience, and leaves the reader or viewer yearning for more … you’ve got yourself a highly effective piece of B2B content marketing. The specifics within this framework are flexible and open to your own creative spin – you’d hardly be able to check the “originality” box if that wasn’t the case – but the overarching principles of impactful marketing narratives are quite consistent in every successful production. They’re most often found in movies and video games too, for that matter.

To learn how you can apply this formula to establish stronger relationships with your audience, check out my blog post on channeling the skills of Abraham Lincoln to build trust through storytelling.