Make Print Powerful by Sharing Your Memories of Print 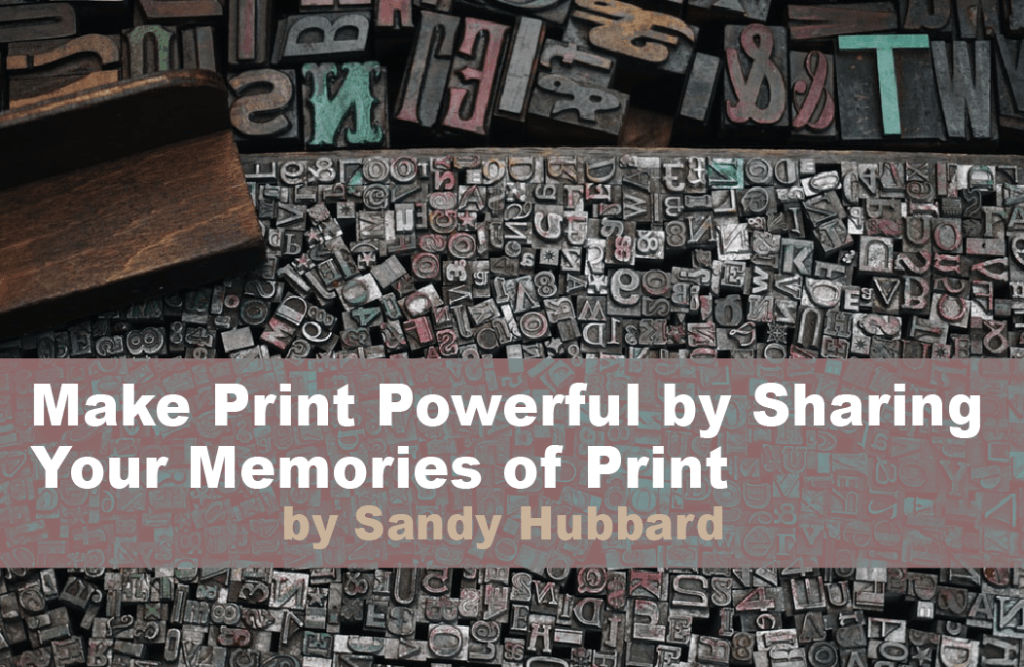 To help print thrive, we must find ways to share our personal stories about print with those outside the industry. Emotional stories and vivid, life-changing memories remind people of the role that print has played in their own lives.

Before I started kindergarten, I lived in a small town in northern Michigan where it seemed like it was always winter. My dad and grandpa owned the local newspaper and print shop, The Lake County Star. I didn’t get to visit them at work very often because it was a dangerous place,with press machinery and pots of molten lead.

But when I was at “The Shop,” I loved every minute.

I would look out the windows at the fat icicles that ran from the roof to the ground. I would sit by my dad as he operated the Linotype, and I would marvel at his speed and ambidexterity in setting type.

As in most small towns, the stories in the newspaper centered around local events, schools, the police reports, and the fire department.Every day at noon, the whistle-siren for the volunteer fire department was tested. Its plaintive howl started low and then echoed through the town for many seconds before tapering back to silence. The noon whistle (along with sonic booms, remember those?) terrified my younger brother.

For me, it was all thrilling.

When the whistle went off at “not-noon” (called that because we kids would ask if it was noon or not noon), my dad would grab his hat, camera and notebook, and dash for the car. When he returned, he would tell me about the fires and emergencies that he was going to write about for his newspaper. We lived across the street from the funeral home, and that was part of the news-gathering process as well. My mom thought I would worry about death and disasters if I heard too much, and she would cross her arms and raise her eyebrows if he was too descriptive.

I did shiver with fear, but I loved the details. (Here’s a photo of me listening to Dad’s bedtime stories!)

One day it was just me and my dad at home while my mom was out with my siblings. The noon whistle went off — not at noon — and my dad looked at me with dismay. I understood the situation immediately. I told him I would wait in the car while he did his work, and I promised I would behave.

It worked. He swiftly loaded me in the car (no car seats back then), and off we went.

In our town, almost everyone had a snowmobile and a winter vehicle in the garage, along with an extra container of gas or a tank of propane. He said he would come back if the smoke turned black, but for now, I should wait in the car.

The volunteer fire department was already there and working.

As soon as my dad walked away, I rolled down the window so I could hear the men shouting, The car hummed from the vibration of the fire trucks. I took a giant whiff of the smoke.

I made a wish for the safety of the people and anything precious in the garage (no dogs, I hoped, since many people kept their “outdoor” dogs in their garages).

My dad walked over to the fire chief, who shook his hand.

As editor and owner of the paper, my dad was known.

They let him into the cordoned-off area so he could take photos. I saw how he waited until they signaled him before stepping over the fire hose. He worked quickly and then went back to the chief to interview him. I could tell the team respected my Dad — and he did not take advantage of his prerogative.

After a while, my dad came back to the car and told me the garage was empty, and the fire chief was not going to try to save it.

We stayed and watched the flames for a while and then headed home.

When my dad developed the photos from the fire, there was a picture of me standing on the seat of the car with my head and torso out the window.

He did not use that one in the newspaper.

Shortly after that, I learned to read… and tell time. I wanted to know when it was noon or not, and I wanted to read the newspaper.

Every time I thought about the fire, I remembered how thrilling it was to arrive on the scene — and how my dad was able to walk right into the middle of things.

It was a powerful experience that shaped my interest in print and media.

Once I was in elementary school and beyond, I worked on the school newspapers and yearbooks. I learned both the reporting and production side of publications, and I learned how to be on a team with other hard-working writers and editors.

Although there are many places along the way that solidified my interest in print and publishing, it was the garage fire that sparked it.

The fire — with its sights, smells and sounds — is a print-powerful memory.

Even the most digitally-committed person has a significant memory about print. Print is an essential part of our culture, consciousness, and connections. As printers and publishers, we must regularly remind those around us of the important role that print plays in our world… and in the hearts of every person.

Thanks for listening to my story, and I can’t wait to hear yours! Feel free to share in the comments below.

Sandy Hubbardhas beenauthor and contributor at Print Media Centrsince 2011. She is a Marketing Strategist and Business Consultant who serves print, publishing and media businesses. Sandy helps clients build their businesses using solid, proven techniques and a systematic approach. She hails from a long line of printers, publishers, authors, and newspaper owners. For 22 years she published a magazine for the printing trade, counseling her readers about how to make better business decisions and grow in an evolving print landscape.

Connect with Sandy onLinkedInand find her on Twitter at@sandyhubbardevery Wednesday at 4 p.m. ET, leading or co-hosting#PrintChatwith Deborah Corn of@PrintMediaCentr— Join in the fun at social media’s most popular chat for the global printing industry!