Can you teach an old dinosaur new tricks? — Futureprint 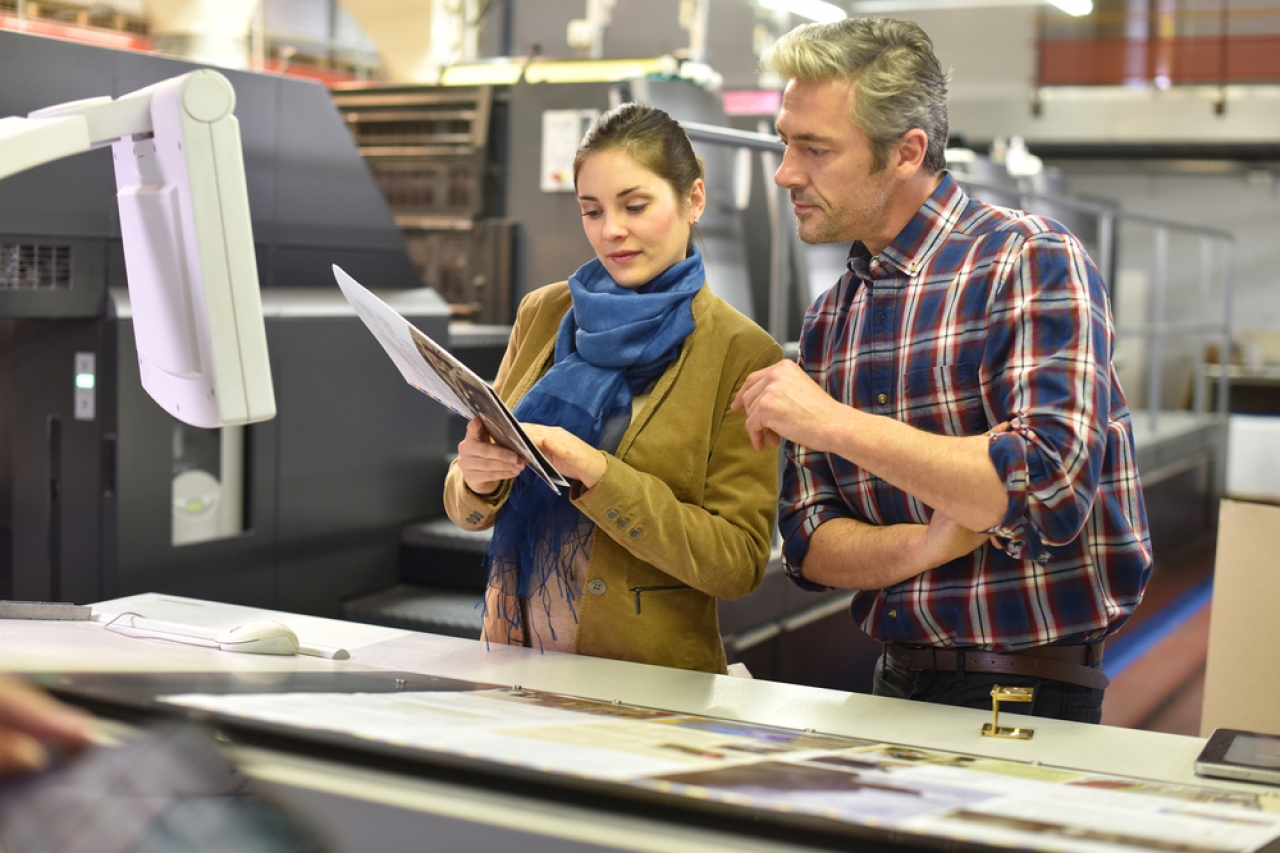 Metathesiophobia is a great word, unknown by most: an extreme fear of the unknown that causes people to avoid changing their circumstances.

Does this kind of fear and paralysis exist in industries traditionally involving analogue printing?  Screen, flexographic, rotogravure and offset are all inherently best when printing the same thing many times.  They have ruled the printing planet for hundreds of years. The need for large quantities of the same prevails, however, the world has changed.  Few would deny the evolution of consumer demand towards wider variety or individualisation.  Earlier customers for printed matter had no resemblance to today’s consumers – no one-off printed t-shirts in the 15th century when Gutenberg made ready.

Some dinosaur industries struggle with the shift, do nothing or, worse still, are dangerously oblivious. Generally speaking, if growing demand for anything is not met by supply, let’s not pretend it will be sustainable.  Tension can build to a point when change happens with a bang and, in such a scenario, there are probably going to be casualties.  Getting to understand the unknown and projecting forward to create agile supply to meet fast-changing consumer demand has to be managed, now more than ever before.

Digital print enables the ‘one-off’, a characteristic expectation of modern consumers.  There are some excellent industrial inkjet tools developed, proven and available: a huge array of shapes, sizes, capabilities and price tags.  However, inkjet is not a drop-in change. Any business or operation looking to implement new tech to do things differently has to consider the whole supply and value chains, the end-product value proposition and the route to market. To print individual things is great but the outbound workflow to enable delivery to individual customers must also be built-in.  This is more than a technology challenge.

Doing nothing, Metathesiophobia, sticking one’s head in the sand, is dangerous.

Some people may still think a carbon footprint is a mark left by a miner’s boot on return from a proper day’s work extracting fossil fuel.  Whether coal is needed or wanted, this is still big business for civilisation, subsidised by governments who may not mind environmental pollution as much as they say they do. Following with another wild statement, dinosaurs or stereotypical retro-people, think consumers should be grateful for what factories produce and it would be better if choice was narrowed to make manufacturing easier and more ‘efficient’.

On the other hand, a new, younger human species shuns politics because older people never listen and are trashing the world.  Some don’t go to shops because everything is by smartphone, without which life is un-survivable even for a moment.  With short attention spans, they want what they want, when they want it.  Many care desperately for the earth and human impact although, paradoxically, for online clothes shopping, they send stuff back regardless of the effect on the environment or supplying businesses. The gamut of consumers’ wants and needs is wide, complex and sophisticated.

Like craft beer, this started small, yet the proliferation of the new consumer is spectacular.  This weird and different species is becoming mainstream and has real buying power.  Conservatives reel at the speed and extent of change, how it moved from an absolute need for V8 throbbing muscle to the silent electric hatchback, or no car at all. Between the extremes, many adjust habits and activities little by little to create less negative or more positive – consume fewer resources, consider by-products, re-use or recycle, make responsible choices, and encourage and demand more freedom of choice and individuality.  We’ve all adopted new consumerism, even those employed in Luddite manufacturers, though paradoxically not always applied to our own fields of industrial endeavour.

Old-school manufacturers and printers cling to past ways, desperate for continuity and doing what they’ve always done.  We all do that a bit for comfort and there are plenty of cases where old ways do and should sustain.  Nevertheless, we should remember the boiling frog.  Holding on to old ways, not recognising societal and market change, and ignoring opportunities to adapt by adopting new technology can be risky.  Trying to boost efficiency and uptime of analogue printing, reducing make-ready, and tickling at the edges for small gains is correct up to a point - as long as it’s not avoiding harsh realities like intrinsic process or supply chain constraints, obstacles to customer satisfaction, or missing benefits available from completely new methods like digital print.

Some new or alternative methods will ultimately force old ways into obsolescence, and perhaps some operators likewise. For some, the habitat will shrink, and food sources will become scarce, as the rain forest of plenty is felled by the burger-beef farmers of progress.  Or perhaps a COVID meteorite and a geopolitical ice age might have already changed the world more suddenly.

The dinosaurs will keep roaring until their last breath about how they know best, and things were better in the olden days.  They will repeat their mantra over and over that digital is more expensive (even though their own wastage and sundry costs are hidden as overheads, plus inventory levels and ROCE are ignored. (Are Ostriches dinosaurs?). Diehards continue to plan efficiency theoretically in the old paradigm of one product version produced continually, ignoring the new, unreasonable, insatiable consumer zest for choice and change thundering towards them like a Tsunami.  Even if all the old guard group together like a supportive retinue attending King Canute, this Tsunami cannot be stopped. Interestingly, King Canute actually ordered the tide to go out to prove to his fawning courtiers that even he had limited powers.  Canute lived only 400 years before Gutenberg, and we've been using analogue printing for nearly 600 years.

Lot sizes have become smaller, and averages will continue to shrink.  This is not a temporary phenomenon and there’s no point in hoping it can be controlled or reversed.  It comes from consumers like us who no longer feel glad and grateful for being told by producers that we must all have the same - Henry Ford style, any colour as long as it’s black.  Producers, printers included, will be forced to accept that run lengths, the bedrock of their whole production EOQ model, are permanently reduced and will inevitably reduce further.  This happened in so many categories and, for printing specifically, newspapers and magazines, billboard posters, ceramic tiles, and books, and it begins now with packaging (aforementioned craft beer)…  It will happen too in décor for furniture and flooring.  We, consumers, think this is good.

Nature adapts.  It is not the fastest or strongest who survive but those most adaptable to change. Crocodiles and rhinos live on, but other species evolved, grew fur and feathers, and thrived in changed conditions.  The giant brontosaurus didn’t and became extinct as a consequence.  It seems inevitable that some major print industry hulks, incumbents dominating their sectors, must really change or they won’t survive.  Not just pseudo change: a brontosaurus with a bit of fur and a token diet is still unsustainable.

How should this be managed?  Will some fall for the good of the remainder?  There may be unforeseen and dangerous new entrants to some segments who quickly introduce change. Some mainstream giants may initiate and lead upheaval of their own operations, to remodel.  Some “market-owners” may be persuaded to gradually adapt – learn or be taught new tricks.  Incidentally, collaboration is a big part of species’ success in evolution.  Large incumbents do have the opportunity to enact change in their industry segments that can impact the world.  Inkjet developers have been hoping for this.  However, big industrial beasts see change as a risk of losing what they already have.  Metathesiophobia!  Some must fear the effect of even a tiny revenue reversal on shareholders.  Yet shareholders are ultimately ordinary people like us, consumers, and don’t we want to change in so many ways?

Focusing on industrial print, inkjet can offer some of that change in the right direction if used properly.  New can be good, but not always:  Fervent technology freaks who see no difference between the ‘baby and the bath water’ can be dangerous.  Buzzing around like annoying insects, technology activists prescribing digital complexity in any situation without understanding context, costs and benefits are irritating and off-putting. Simply dropping in a high-speed, high-throughput digital equivalent to analogue in the same part of the process chain, maintaining a pinch point with a very few centralised print operators and unchanged infrastructure, plus the same output sold in the same way via the same channels sounds like a brontosaurus with a bit of fur.  The application and format of technology need thinking through more broadly.  What else should change beyond merely the means of depositing ink or fluid?

Current centralised manufacturing, including analogue print, has consolidated and evolved for efficiency at a time of predictability. From The Economist, “The era of predictable unpredictability is not going away”.

Centralised models could be seriously undermined by a multitude of multi-pass, scanning entrants, a swarm of digital guerrillas gnawing at the volumes “owned” by the few traditional big guys like locusts or even flesh-eating piranhas.  These can supply fast, local and on demand.  For some applications, there are no pre and post-print processing obstacles, very low barriers and no cost of entry for experienced, wide-format inkjet activists.  They can take chunks of business for such as wallpaper or textile, printing on demand, forming new routes to consumers, and perhaps feeding the appetites of their simple but omnipotent printers with a range of different printed product outputs.  This is a typical kind of wild, free-thinking diversification for digital-savvy natives who have no respect for the old industrial order and carry no legacy infrastructure, assets or cost of an analogue operation.  A swarm of nimble digital natives could spell death by a thousand cuts to the lumbering traditional chaps.  They could take over whole industrial sectors.

Some manufacturing processes and supply chains involving print are ripe for urgent change.  Some have for decades been constrained by the printing process and supply.  Some have inherent inertia to change or risk adversity. There is certainly a perceived safety in conforming to herd Groupthink.

The risk of adopting digital and inkjet has been unacceptably high.  A lack of realistic options involving digital printing has existed: industrial inkjet proponents have not always been great at seeing the detail of problems and creating real solutions, or perhaps have been persuaded by some powerful dinosaurs to produce digital-analogic monsters that don’t make anything better.  However, nowadays there are some really good industrial inkjet alternatives – new tricks to change supply from push to pull, to eliminate WIP and inventory, time delay and risk, to increase variety and consumer satisfaction with greater efficiency – so no excuses. Inkjet technologists do have the power and capability to enable using realistic and viable options.

In this jungle, only the fittest, most agile, and most adaptive will evolve, survive, and dominate.

Should the industrial inkjet community support and equip the digital guerrillas to steal from the big beasts? Or do we try to introduce sensible capability and supply chain change to help some of those big guys thrive?  Perhaps both. Some of the dinosaurs probably thought they might change over time but they failed to change in time.

In the industries targeted by digital print technology such as corrugated or other forms of packaging, do we think or merely hope the dinosaurs can learn new tricks? Have some had their day already?