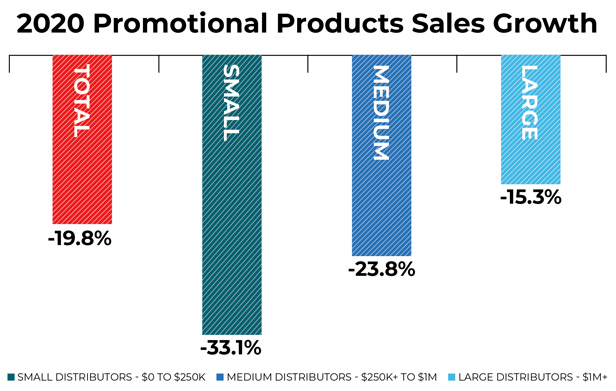 The year-over-year decline was better than expected at the beginning of the pandemic, thanks to the industry’s pivot to PPE.

In the most challenging year that the promotional products industry has ever faced, distributor sales dropped, on average, by 19.8% in 2020 compared to 2019, according to ASI’s just-released Distributor Quarterly Sales Survey.

While distributors’ total annual sales of $20.7 billion marked the lowest collective tally since 2013, the decline of just less than 20% for the year was encouraging news, considering that earlier in the COVID-19 pandemic there was widespread sentiment among promo firms that the industry would see a drop of 30%-40%. Still, some distributors did fall into the steeper decline range, including 4imprint (asi/197045), the largest distributor by revenue in the industry, which reported that sales dropped 35% in 2020.

Of course, the industry’s pivot to personal protective equipment (PPE) prevented a more precipitous year-on-year decline. PPE/hand sanitizer sales accounted for $6 billion in revenue in 2020 – 29% of all industry sales. If you exclude PPE revenue from the total, distributor sales would have fallen 43% for the year.

“Considering the situation, I’d say the market is surprisingly strong,” says Matt Eckhouse, vice president and general manager of Top 40 distributor Staples Promotional Products (asi/120601). “We certainly met 2020 with creative solutions for new customer needs, including PPE, and this data shows other distributors did as well.”

In the fourth quarter of 2020, traditionally promo’s strongest quarter, distributor sales were down just under 17% year-on-year, a significant improvement from the 44.4% plummet in Q2.

“Although the demand for PPE decreased after the initial panic buying early on, the demand picked back up in late Q3 and throughout Q4 with our AIA community seeing large recurring orders,” says Nancy Schmidt, CEO of Top 40 distributor AIA Corporation (asi/109480). “This, coupled with a healthy increase in traditional promotional products sales in Q3 and Q4, provided for a nice close to the year.”

The Counselor Confidence Index, which measures distributors’ financial health and optimism, rose from 76 in Q3 to 85 in Q4. It’s another indicator of the industry’s rebound, as the index reached a record low reading of 54 in Q2. The baseline reading is 100.

“COVID-19 appears to have had less of an impact upon distributors who were able to more nimbly react and respond to the shift in market needs,” says Kevin Walsh, CEO of Top 40 supplier Showdown Displays (asi/87188). “Suppliers also reacted but were not as nimble due to their prior commitments to existing inventories, supply chains and manufacturing processes. Keep in mind – up until mid-March, the industry was experiencing record volumes in traditional products.”

Most of Showdown Displays’ products are meant for trade shows, conferences, sporting events, fundraisers – all crippled by shutdowns. As a result, the Brooklyn Center, MN-based supplier had to repurpose its inventory and develop PPE, such as face covers, sneeze guards, distance dots and sanitizer displays. In the process, Showdown generated more than $7 million in revenue from products developed during the pandemic.

“2020 was tough, but also inspiring,” Walsh says. “I’m excited about the year ahead, but reasonable at the same time. We anticipate 2021 will start slowly as the vaccine is beginning to become available and that it will accelerate in the summer, rising rapidly in late Q3 and into Q4.”

San Francisco-area distributor Harry Ein, owner of Perfection Promo, says his sales declined about 40% in 2020. And that’s even with selling PPE. “Most of my business is completely event-driven, and unfortunately, my clients haven’t really done virtual events,” Ein says. “I don’t have an optimistic outlook for 2021 until maybe Q4. Right now, I’m taking the time to step back and think long term, keeping my mind fresh for creative ideas.”

Dakota Promotions & Printing (asi/174238) stayed afloat due to the first round of the Paycheck Protection Program (PPP) loans. Since then, PPE sales have cooled off and Q1 hasn’t provided much hope. Jane Halverson, president of the Bismarck, ND-based distributorship, says if she doesn’t get another PPP loan, she’ll have to close or move her business headquarters back to a home office. “Business is still extremely slow as January usually is for us, but this year is even worse,” Halverson says. “If events don’t get back to normal, all promo businesses will suffer. The small shops like mine will be wiped out.”

Canadian promo firms have faced similar struggles. London, Ontario-based distributor McCabe Promotional Advertising (asi/264901) finished 2020 with sales down 15% from 2019. Q1 has been slow so far, but PPE remains a lifesaver, accounting for close to 50% of the company’s sales less than a month into 2021.

“Although I didn't get into business to make less money than the previous year, I have to remind myself to be thankful that we are still here,” says Jamie McCabe, president of McCabe Promotional Advertising. “I have faith that when the vaccines are plentiful and we are allowed to mingle again, great things will happen.”