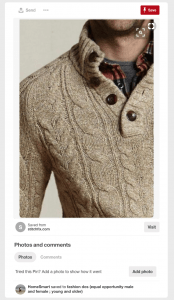 You already know that a successful content marketing initiative has many business benefits besides the obvious goal of eventually increasing revenue.

But how do you explain those ethereal achievements to internal decision makers fixated on hard numbers? And what examples exist to prove content can actually realize those benefits?

As usual, we’ve got you covered.

Here’s a telling list of 18 non-monetary business goals that content brands — when done correctly — can achieve for your team.

Look no further than Under Armour’s acquisition of mobile apps MyFitnessPal and MapMyFitness to see this business benefit in action. The apps themselves are a unique content marketing outlet for the athletic apparel brand, sure. But just imagineover 200 million users divulging informationlike fitness goals, caloric intake, apparel tastes, nutrition details, workout preferences, and sleep habits…  all while engaging with your content.

How does that value translate? Consider the “participation marketing” of StitchFix. A private stylistasks customers a few zillion questionsto outfit them in goodies that make a them feel like royalty. So is theirs a product, a service, or something entirely unexpected, like a data science operation? When preparing to file for an IPO, thedata set collected was among the brand’s most valuable assets.

An email address isn’t data. It’s access. It’s permission.Approval to engage again. “Did you enjoy what you just read?” asksa demure Jonathan Fieldsat the bottom of every thought-provoking article he publishes. Clearly, a reader would not have reached the bottom if not for enjoyable content. In other words, the answer is always yes. “Cool,” he answers the unspoken. “Then get more.” Followed by an email subscription box.

The University of Alberta uses a similar tactic. “You seem interested in UAlberta News,” readers are prompted after lingering. The University’sdigital analyst Jason Buzzell explainsthat from the day they began collecting email addresses, content took on a new role: to generate more inbox access.

If anyone on your team calls your email list “data,” gently remind them: data are details. Email addresses arepermission.

L’Oreal’s unbranded Fab Beauty siteembodies what founder Eugene Schueller said about there being two kinds of advertising: “publicité d’attaque, designed to raise interest, and publicité de rendement, designed to maximize sales.” No successful business promotes their own industry and later regrets the investment.

Can content marketing build relationships among family and friends? Instead of strengthening your own relationship with prospects, consider creating something that enhances your audience’s third-party tribal interactions.Tablespoon from General Mills attains this goalby  explaining things like how to involve kids in cooking, why romance really does start in the kitchen, and  which crowd-sourced recipes rate highest. Save your readers or viewers the stress of feeling unprepared at home or in their communities, and you will have achieved something so special no software can (or should) measure it.

Quick, what’s the first online resource that comes to mind when you want to know about recent mergers and acquisitions in the technology world? If TechCrunch’s interactiveCrunchBasecame to mind, consider yourself exhibit “A” of proof that a content brand can successfully inform a savvy niche segment.

Nationwide’sMakesafehappen.comexploded onto the scene with the infamous 2015 commercial thatreceived such a backlashit should have toppled the content brand. Thankfully though, the bad entrance didn’t spook stakeholders into shutting down the platform. In fact, the content destination now hasan award-winning mobile appthat helps parents prevent scenario-specific mishaps that could inadvertently put a child in danger.

If injury prevention is a little too heavy for your messaging strategy, consider other common frustrations your content brand could assuage. For example, the torturous homework hour. You see, not long ago, Hershey’s decided to make nice with the loving mothers notoriously known for banning sugary foods at home in the interest of youngsters’ dental health. How? By hiring children’s author Jerry Pallota to create and publisha series of math booksthat feature – you guessed it – Hershey’s candy. Now,kids gladly weigh, measure, sort, and countwithout the generations-old “but math is hard” struggle.

Changethecycle.com is the frank, older-sister-styleconversation about women’s reproductive pains(and joys) that “goes there.” It’s powered byHologic, Inc., a healthcare and diagnostics company. Through this content brand, women that have never spoken up about what could otherwise be an embarrassing or isolating situation are finally finding a voice.

But hey, if you’re stuck at work…

It would only take a quick minute.

Why not make one that features the whole team? You could create a few Elf Yourself videos for the kids, while you’re at it. There’s still a minute on your lunch break, and everyone would love your customized touches…

As you play around with the interactive game, you’ll realize Office Depot’s silly content marketing move is pretty fun, after all.

Depending on whose face you use.

Mary Meeker’s Internet Trends Reportis a revered once-a-year in-depth release of research that educates KPCB’s peers, clients, competitors, and commentators in every industry. It serves both a narrow, insider audience, but it also educates the rest of the world. Regularly. Usually, strategic content can only achieve one or the other.

Airbnbmag (Pineapple’s replacement) is arevenue-generating content platformthat proves the brand’s biggest competitor is not hotels, but the temptation to stay home. The print publication’s goal is not to convince readers to choose one lodging option over another, but simply to get out of the house and away from the same old routine.

Chili’s has a long-standing tradition of proudly claiming to be the best place to work. But in a world where every company boasts the same, the restaurant had to get creative to stand out. Leaders asked employees to share on social whenever they experienced an especially inspiring moment at work, using hashtag#todayschilis. Had the brand notalready established their strategic story, the ask wouldn’t have made sense.

Well-moderated Q&A forums are one of the best content marketing plays. An emotional memory is lodged when a human shares personal observations, experiences, stories, and advice with another human. Take, for example, Pottermore’sWizarding World book clubfrom J.K. Rowling. “Read, discuss, and delve deeper into the Harry Potter stories with anyone, anywhere,” the site claims. As though thePottermore site itselfweren’t enough.

Another brand-sponsored haven is the Houzz-ownedGardenWeb.com, where participants can (and do) ask one another the types of questions no corporate brainstorming meeting could possibly cook up. The safe place is perfect soil for trust to grow.

Today, nonprofit health insurance provider HBF takes the concept a step further to achieve the same customer retention goal. The medium?Direct Advice for Dads, or “DAD.” It’s a proactive example of man-to-man straight talk that covers questions guysdon’t even know they should be asking. And at the sweetest, hardest, most confusing time of life. In other words, just in time.

Yes, there is a time and a place for public experimentation. Experimental content creation can be just as successful as the predictable, strategic stuff – as long as it’s designated exploratory work. In 2007, the New York Times and Stanford University together started an online education  curriculum called the Knowledge Network. A few years later, the program was shuttered.

When Minecraft was ripe for acquisition, why would a brand like Microsoft take note? Here was what appeared to be a bunch of idle youngsters addicted to building imaginary worlds with basic object-oriented coding.

CouldMicrosoft have had a long-term mindset? Could Minecraft be the beginning of many epic engineering careers? It would be a smart, far sighted move, the kind Lockheed Martin had in mind when crafting thefield trip to Mars VR experience for grade schoolersinterested in space travel.

Inspiring kids is one more way to support your industry as a whole, and smart content marketing can do exactly that.

In 2001, BMW produced The Hire, an8-part short film series starring Clive Owen. The episodes were released four years before YouTube, and in no time, earned a cult following.

Whenin 2016 a bulletproof BMW was involved in a heroic actthat saved dozens of people, brand loyalists celebrated. Overheard: “I’m a BMW guy, I couldn’t let that just go.” There are many reasons anaudience will rise up to defend a brand. Topping the list is a relationship built on trust.

In 1922, just before Procter & Gamble ventured into episodic radio dramas (which would eventually morph into daytime TV’s celebrated “soap operas”), the brand created a long-running serial story for placement in the major newspapers.The format? An entertaining comic strip. The story’scharacters represented none other than the brand’s target audience– and conveniently, the publications’ readers. The protagonists’ favorite soap? Ivory, of course. Within the narrative’s first six months, the soap’s sales increased an eye-popping 25%.

It’s a rare marketer indeed who marches in to the boss’s office and asks for a sizable content marketing budget for the purpose of changing the world. In fact, that conversation has probably never happened. But some content brands have taken on a life of their own and eventually, over time, indeed changed the world. So don’t ever rule it out as one enormous possibility.

So. How will you use these examples as youbuild a case for an audience-first content destination?

Because yes, good content marketing can (and often will) move the revenue needle. But don’t forget the many other business benefits a generous, thoughtful content experience can achieve.